"The power is yours!" ~Captain Planet
Leave a comment

Taking the Meat Industry ‘Out to Pasture’

Posted by Fel Wetzig on August 13, 2011 in Animals, Eating Natural

I recently had a talk with my doctor about the use of antibiotics, especially those used on animals in the meat industry. 80% of the antibiotics in the U.S. go to this purpose. Why? Is it because the animals are getting sick or to prevent the spread of sickness? No, the antibiotics are given in low doses over the life of the animal because it makes them grow faster! Not only is this ridiculous, using human drugs needlessly on animals just to make them grow faster so they can be slaughtered quicker, it’s a clear path to the creation of antibiotic resistant strains of bacteria!

The importance of using antibiotics wisely can’t be stressed enough. When you go to the doctor and get a prescription for antibiotics, they always tell you to finish the entire bottle, even if you begin to feel better sooner. This is because you may begin to feel better before the bad bacteria is completely wiped out. Even with your body on the path to recovery, your immune system could help finish off the bacteria, but if you don’t finish that bottle of antibiotics and make sure the strain is completely gone, the strain could develop a resistance to antibiotics.

It’s similar to how a flu shot is supposed to work. The body is injected with just enough of the virus to build up a resistance to it. It doesn’t guarantee you won’t get the flu, but it’s supposed to help lower your chances. Well, the same things happens to the strains of bacteria when they get a low dose of antibiotics. By now it should be easy to see why giving animals low doses of antibiotics can be a problem. These doses aren’t usually enough to kill off strains of bacteria, and in the end they could very possibly be making the strains of bacteria stronger. Many of these animals are also given hormones, and the meat is treated with additives, “flavor enhancers,” and probably a few other chemicals. Because the animals are raised confined in small cages, forced to grow unnaturally fast, and given so many chemical additives, you don’t really know what you’re getting when you get to the grocery store, and the taste will be far from ideal.

One option is to avoid eating meat. For vegans and vegetarians, this is as much about the rights of animals,  fighting the cruelty of slaughter houses and sustainability as it is about their own health. But the decisions of this minority aren’t really enough to change the big picture. The farming industry will continue churning with few changes unless the majority of people begin to take action. 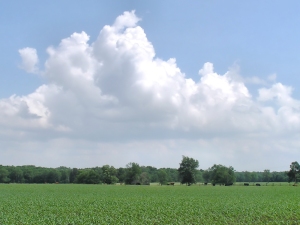 Another option is to support natural free-range meats. Randolph, Ohio is home to the Salt of the Earth Farm, which raises animals humanely on an open pasture.

According to the Farm’s listing on localharvest.org;

“We do things as sustainably as possible around here. All the animals are pasture based and supplemented with boiled barley from a local brewery, locally grown grain, organic produce and locally made bread. It sure is a lot more work than feeding animals commercial feed, but the animals sure appreciate it and the taste is far superior to factory farmed grocery store meat. The animals are not caged at any point, and each life is precious to us.”

Farms such as this don’t produce nearly as much meat as industrialized farms, but the quality of the meat (and the quality of life for the animal) is far superior to the processed junk you’ll find frozen in most supermarkets and the price will reflect this difference accordingly. Obviously a small farm that lets animals mature naturally will have higher costs and a limited supply, but it’s really worth it.

“All Giant Eagle® Nature’s Basket® foods are produced without artificial flavors, colors and preservatives. We support farms with earth friendly methods that are environmentally sound and resource conserving.”

This line may offer another alternative since these animals have also never been fed hormones or antibiotics, and the quality and taste are obviously better than most other brands, but their methods for raising these animals aren’t as clear as local farms like Salt of the Earth.

Whatever route you decide to take, you should know what’s in your food, and the processes it went through before it reached your table so you can make healthier and more sustainable choices.

Felicia Wetzig writes to appease the “peasants” in her head. A student of history and library science, she enjoys finding new ways to look at folklore. You can find her and the peasants at Scotzig’s Blog, and on twitter with @Scotzig .

← The “Fit” Economy
Natural Items for Your Health & Beauty! →

This blog, and our authors, like all Planeteers are committed to a more sustainable and healthier future. We're not here to tell you what to believe, but to present our ideas on how we can make the future better. Whether it's eating healthier in your own home, switching to natural products, recycling, conservation, or animal welfare, we're just a group of people trying to educate others.